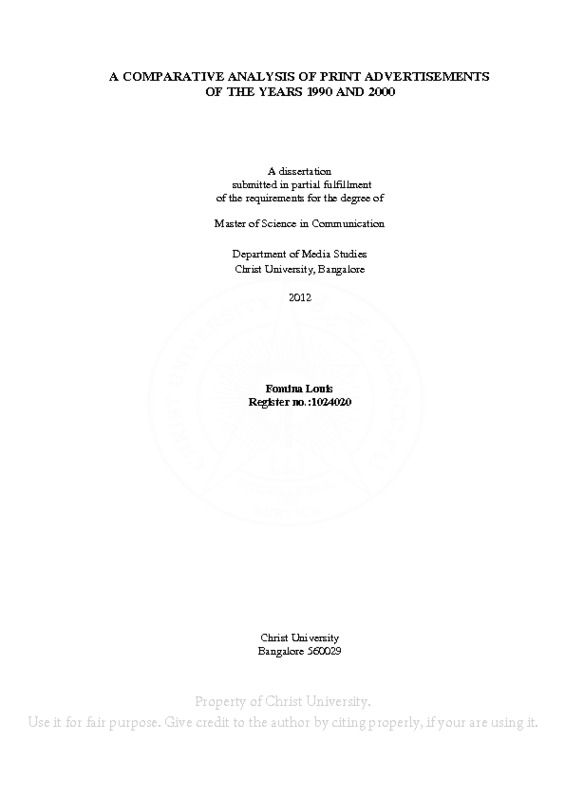 This content analysis of a sample of advertisements of 20 print copies of various Indian products during the 1990s and 2000 examined the impact of the national economic conditions on advertising and its effect on 4 major aspects- text, visuals, typeface and layout. This study suggests that the impact of national economic conditions and the prevailing culture in the 1990s and 2000 on the use of advertisement elements in the different FMCG (Fast Moving Consumer Goods) product advertisements seemed visible. Advertising is part of the changing social, economic, and cultural environment, and its visuals might have been created in a way that could reflect those changes that people would want to adjust themselves to. Another way of linking advertising and its visuals to society and culture is the cultural approach to advertising. Cultural historians argue that advertising is an important window through which different aspects of society and culture can be explained. But also, the advertising itself can be explained to determine how it might have been shaped by society. While identifying the purpose of this study, more knowledge about the evolution in print advertisements is acquired. The research has given a better idea in recognizing the past advertisements which were during the beginning of the Globalization period and has compare it with print advertisements of the year 2000.

Louis Fomina, “A COMPARATIVE ANALYSIS OF PRINT ADVERTISEMENTS OF THE YEARS 1990 AND 2000,” CHRIST (Deemed To Be University) Institutional Repository, accessed June 27, 2022, http://archives.christuniversity.in/items/show/1252.