Meaning in Life as Constructed by Male Adolescents of Alcoholic Parents 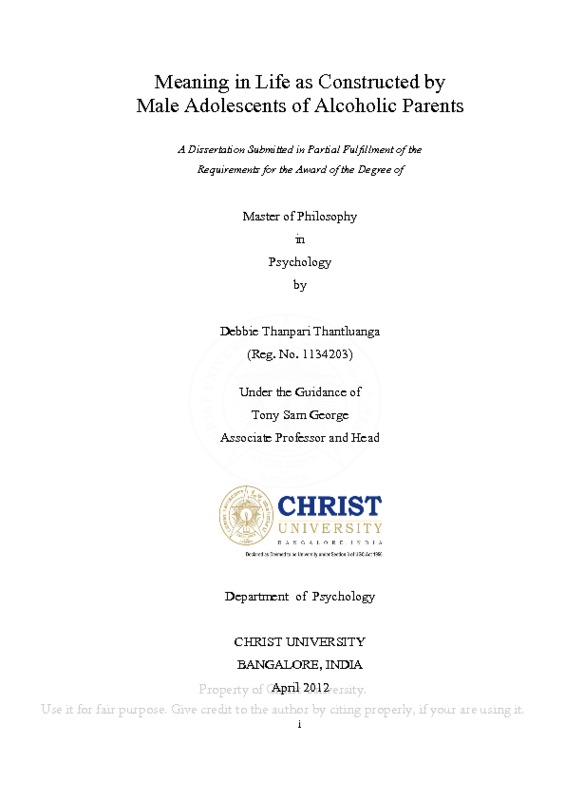 Meaning in Life as Constructed by Male Adolescents of Alcoholic Parents

Little research has been done to understand the experiences of male adolescent living with an alcoholic parent. This qualitative phenomenological study was used to explore and understand how the sons of an alcoholic parent living in South India find meaning in their situation. Alcoholism occurs in India as it does in all nations, but here there is a greater sense of shame attached to it and it is less mentioned than in Western countries. The sample in the study is selected according to the non-probability and purposive sampling technique. Data was collected through semi-structured interviews in which the researcher interacted with the participants. Five boys were interviewed between the ages of seventeen and twenty; three attend a prestigious college while the other two were no longer at school. Some from wealthy families while others were sons of day labourers. All were keen to advance in their chosen careers, some through gaining degrees. Sports and recreation were important to them and it provided a sense of achievement and a release from the stresses of a dysfunctional family. There were supporting features in the lives of the boys; support coming from mothers, older siblings, sports coaches and some teachers. Other ways of gaining a sense of value was by having a personal faith in God and by helping younger disadvantaged children. The counter to this was that some teachers did not understand and were critical of the boys while in most cases members of the extended families like uncles, aunts and cousins interacted in negative way. The exceptions were grandparents who either were able to control their alcoholic son or could provide time and support to their grandson. The negative influences added to the stresses of living with an alcoholic father. What was surprising was the degree of maturity of the boys; they accepted that alcoholism was a disease and that it was not their fathers fault, and they remained loyal to their parent. This study shows that the school sports coaches have a more positive influence than teachers. This may be because coaches have a more holistic approach than teachers. It highlights the need for schools and colleges to adopt a more proactive approach to at risk students by identifying such students and for training of teachers in how to deal with these students. Thematic network approach to data analysis was used. This involved organising the data into three levels of themes reflecting salient themes i.e. basic, organising and global themes (Attride-Stirling, 2001). Attride-Stirling describes six stages in analyses involving thematic networks involving devising a coding framework, identify themes, refine the themes, constructing the thematic network, describing, exploring and summarising the networks and interpreting the patterns. Five global themes emerged from the analysis. The male adolescent need for praise, building self-esteem, helps, belief, being misunderstood by others. Recommendations are presented to create conditions necessary for the male adolescent. This involves education and creation of supportive environments for the male adolescent and his family. Key words: Adolescent of alcoholic parents, Meaning in life, Alcoholic, Thematic network, Logotherapy.