COMPARATIVE ANALYSIS OF ORGINAL MOVIES AND ITS REMAKES IN INDIA 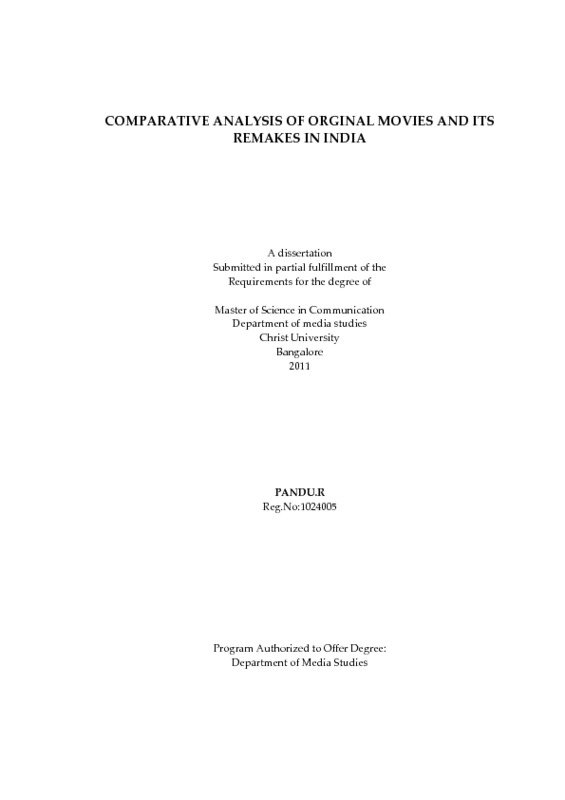 COMPARATIVE ANALYSIS OF ORGINAL MOVIES AND ITS REMAKES IN INDIA

The remake is a phenomenon both well-known and immediately recognizable but in India it is not theoretically analyzed. However, by analyzing these remakes, we can understand how these films reflect some specific cultural differences between one state and other State in India. Here researcher has taken four original and its remake films to understand the phenomena of remake. The highly intensed watching the films has helped researcher to understand the difference of films original and remakes. Researcher took one Tamil Movie and its remake in Hindi and also a Malayalam Movie and its remake in Tamil. Films are Tamil Singam to Hindi Singam and Malayalam Manichithrathazhu to Tamil Chandramukhi. All the changes made in movies are on the basis of the cultural differences between the regions where the film is introduced. As researcher have done two Tamil movies he came to know that Tamil Industry possess one culture even though it is a remade they try to change it according to their culture. The basic element of films are the audience, a film is made according to them. So that film Industry sticks to the culture of the audiences.

R PANDU , “COMPARATIVE ANALYSIS OF ORGINAL MOVIES AND ITS REMAKES IN INDIA,” CHRIST (Deemed To Be University) Institutional Repository, accessed May 18, 2022, http://archives.christuniversity.in/items/show/945.